Another year has gone by - it always amazes me how quickly time passes.

May 11th, 2012 was my two-year Anniversary.  We didn't whoop it up - it simply passed by without a sound.  Everything has become normal now - the tingling, the loss of feeling, the feel of talking and eating.  It's funny, though - I don't notice these things now unless they're brought to my attention.  Ashley laughs at me because I will occasionally have the spare bit of food on my lip that I don't feel and has to remind me to brush it off.  LOL

For those of you that don't know it, there is an app out there called "The Ugly Meter".  Dad brought this to my attention during a recent visit to Arizona after reading about it in the newspaper.  Of course, I had to download and try it. 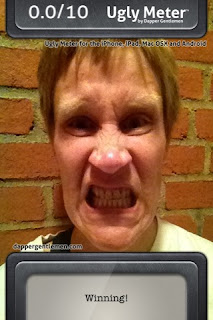 I can whistle! Yay!

LOL..so that's the excitement the last few months. Pretty uneventful here, as things just continue to move forward. I've lost feeling in part of my left cheek again and have pain every so often. Nothing bad, but it lets me know it's there. Maybe it's the cadaver bone talking to me - telling me that I'm not living life as it would like. Who knows. I'm happy to say that the number of sinus infections I get is far less than what it used to be. It's the little things that matter.

Still a few dental procedures to go through - have to get a crown on a molar that's cracked and time to finally replace all my fillings. This has to be done because through the years, I clenched my teeth so hard to try to find a good resting spot for my jaw that I literally wore them down to nothing. I've had two root canals in the last few months, they went swimmingly with no complications. I've managed to break not one, but two of my retainers so Dr. Gerlein just shakes his head at me. Finally got a third, a different kind this time, so cross your fingers for me that it remains intact. When I picked it up yesterday, Dr. Gerlein said I don't have to go back for 7 months. Yeah, right. Like I won't break *something* in those 7 months. He has more faith in me than I do! Besides, I'd miss them if I couldn't see them every couple of months. It's a part of my journey that I enjoyed so much - visiting the orthodontist. It's such a fantastic place. Dr. G and the girls - I can't say enough about them. If you need a top notch ortho, don't hesitate - go there. If I do nothing else today, I know I've done one good deed by giving credit where credit is due. Love you guys!